Importance of the Daniel 9_24-27 prophecy: To the prophet Daniel it was revealed, hundreds of years before it happened, the baptism of Christ in the year 27 A.D. and His death in the year 31 A.D. So in Daniel 9_24-27 we have one of the most amazing prophecies from the Bible, fulfilled with mathematical accuracy. 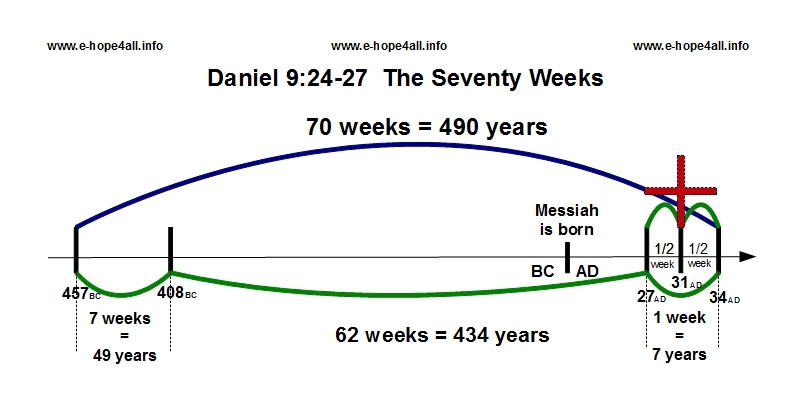 Liberal scholars, both Gentile and Jew, have tried to late-date Daniel in order to remove its value of predictive prophecy. They say the book was written after the events occurred but in such a way as to appear that it was written beforehand. Daniel 9_24-27 is an irrefutable witness that the prophecy of the Messiah’s coming and being cut off is true. Since, no one “late-dates” Daniel to the time of Christ, Daniel 9_24-27 is one clear case of predictive prophecy, which establishes the credibility of everything else.

The probability that Daniel could guess the date of the manifestation and crucifixion of the Messiah is essentially zero. Only supernatural inspiration can account for fulfilled prophecies like this. In fact, these events were fulfilled almost two centuries even after the date assigned to Daniel by scholars who deny that such prophecies can be valid!

457 B.C. – the decree to restore and rebuild Jerusalem, issued by the Persian king Artaxerxes

27 A.D. – Jesus Christ is baptized and begins His public ministry-in the autumn of this year Christ was baptized by John and declared: “The Spirit of the Lord is upon Me, because He hath annointed Me to preach the gospel to the poor.” Luke 4:18 After His baptism He went into Galilee, “preaching the gospel of the Kingdom of God, and saying, The time is fulfilled” Mark 1:14,15

31 A.D. – Jesus Christ is crucified, His ministry ending in the middle of the last prophetic “week”, meaning after 3 years and a half (3+1/2)

34 A.D. – the martyrdom of Stephen sealed the rejection of the Gospel by the Jewish nation, ending the 490 years especially allotted to the Jews.

Daniel 9:24 speaks about a period of 70 weeks until the coming of Messiah. In Ezekiel 4:6 and Numbers 14:34 we have similar examples of applying the principle one day for one year in the context of the prophecy. So the prophecy we have in Daniel 9 speaks not about seventy (70) literal weeks, which is 490 days, but about 490 years.

Daniel 9:25 says that the seventy weeks were declared (by the angel sent to Daniel) to date from the going forth of the decree to restore and build Jerusalem.

In Ezra 7:12-26 we find out that this decree, in its completest form, it was issued by Artaxerxes, king of Persia. This happened in the year 457 B.C.

Daniel 9:26 – The coming of the Romans, under the leading of Titus, is predicted here. They destroyed the Temple (the sanctuary) and the city of Jerusalem. The verse mentions also the death of the Messiah but only in the next verse we see this moment exactly predicted: “in the midst” of the last week

Daniel 9:27 – There were seven years when the Gospel was preached mainly to the Jews: three years and a half (3+1/2) by Jesus himself, through His public ministry, and another three years and a half when the disciples of Jesus preached the Gospel mainly to the Jews. Messiah is “cut off” “in the midst of the week”, the Lamb of God was sacrificed for the sins of the world (1 John 2:2), making “the sacrifice and the oblation to cease” (all sacrifices brought in the Jewish Temple became meaningless after that moment) . In 34 A.D. Stephen, because of his preaching, was stoned to death by the Jews, sealing this way their rejection of the Gospel. This episode is described in the Bible in the book of Acts, chapter 8. Immediately after this, in the same book of Acts, chapter 9, we see the conversion of Saul of Tarsus (later called Paul) and his call to preach the Gospel to the Gentiles.

Peter, divinely guided, opened the Gospel to the centurion of Caesarea, the God-fearing Cornelius. (Acts 10)

Starting date of the prophecy

There were several decrees given:

3.the decree of Artaxerxes to Ezra in 457 B.C. which authorized him to restore and build Jerusalem. The commission granted Ezra an unlimited amount of treasure, to beautify the house of God, to procure offerings for its service. It empowered him to ordain laws, set magistrates and judges, and execute punishment even to death: in other words, to restore the Jewish state, civil and ecclesiastical, according to the law of God and the ancient customs of that people. This decree only assumed the proportions and covered the ground demanded by the prophecy. For this reason the counting of the 490 years starts with 457 B.C

Use the link to print or download a short explanation of the prophetic diagram about Daniel 9_24-27 (it will open in a new window).

Some more interesting details you can find on a similar page dedicated to Daniel 9_24-27 prophecy.

The following video is a very interesting one about the prophecies fulfilled in the life of Jesus, including the one from Daniel 9:24-27