Christian Dress and Adornment in the 21st Century

Christian dress and adornment is a very sensitive topic. These days not too many Christians even dare to speak about it. And it is sad because the way we dress and adorn ourselves has a very powerful message. And we can’t convince anybody that we love God and that we walk in the light (1John 1:7) when we follow the pattern, the fashion of those who are in rebellion with God. You can’t dress in a sensual way and still be God’s son or God’s daughter. A long time ago, in the first century of the Christian era, the apostle John was writing these words: “Little children, it is the last time: and as ye have heard that antichrist shall come, even now are there many antichrists: whereby we know that it is the last time.” (1 John 2:18) If John could say these words in his time, much more we can say the same in our days, if we look at the teachings and the practice concerning the Christian dress and adornment.

Bride Trousers (click to read or download the material) – In Deuteronomy 22:5 there is an interdiction which is not very popular among the contemporary Christianity. Some argue that the culture of the country where they were born makes them behave differently. Some others try to reinterpret the verse to make peace with their conscience.

The pictures below show how big is the difference between faithful Christians and those who don’t follow the Bible any more: 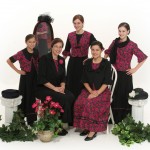 True Dress Reform – It’s important to be clothed according to God’s will both inside and outside. And every change should start from inside and end with our outward look.

Emma Biant speaks about Dress Reform, an encouraging and instructive message for those who want to be faithful to Christ in all things:

In the next two videos we speak about Secrets to become beautiful:

Bluring the gender differences (click to read or download the pdf file) to transform us in Androgynous people (the term means to be both male and female in the same time, or neither male and female), is another strategy devised by Satan to destroy the biblical blueprint. In this pdf you will see how dangerous it is to submit to the worldly fashion and neglect God’s advice. The differences in Christian dress mentioned in Deuteronomy 22:5 have a deep impact on our lives: a positive one if we obey God’s word, and a very negative one if we rebel against it, as it is seen in our society today. Please be patient with the uploading of the pdf. It has 400 pages! But it is very worthy to read it entirely!

Jewelry – Modesty is more and more rare nowadays. We try to adorn our bodies withdifferent things. Is it our exterior beauty a reflection of the interior beauty? This study and the following one, called Cosmetics, are an invitation to go back to our Bibles and think if our exterior really shows that we love our God.

Culture – Whenever we don’t like certain things in the Bible we are tempted to say that the writers of the Bible were influenced by the culture of that time. In this way we are trying to get rid of some verses and instructions. And thus we justify practices which don’t have the approval of the Bible: ordination of the women as priests / pastors and elders, wearing of jewelry etc. But is it safe to follow such a path? Where shall we stop if we go ahead and cut from our Bibles things we don’t like? We should remember that we live in a time when Christianity is called by Jesus as being blind and poor though we boast that we see things in the right way and that we are rich in knowledge.

4 thoughts on “Christian Dress and Adornment”