The history of Christianity is a very complex one. After the resurrection of Jesus, the apostles and other disciples started to spread the good news and all the teachings they heard from their Master. The first centuries are marked by strong persecution from the Jews who didn’t accept Jesus as the Messiah and after that, from the Roman Empire.

History of Christianity – Darkness and Apostasy

In the 5th – 15th century, according to secular sources, intellectual darkness and economic regression became “normality” in Europe. Paganism infiltrated gradually in the church.
The Bible was abandoned, prohibited and locked in chains. It was not translated in the language of the people and this is why the spiritual and moral darkness grew fast. Many new doctrines which contradicted the Bible were accepted and promoted by the papal Rome. 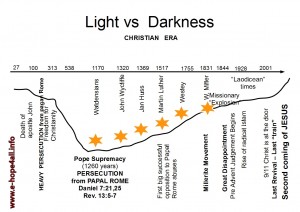 History of Christianity – Reformers in the Catholic Church – Birth of Protestantism

God’s light was preserved by small groups of Christians in different parts of Europe, Africa and Asia, but the majority of those who called themselves Christians, lived in deep darkness and apostasy. But God raised people like the Waldensians and many reformers who called the Catholic Church to reform and abandon practices which were not in harmony with the Bible. A short review of many of the reformers you can see in the video presentation.