Not too many ask this question as the game seems to be an innocent one. Should Christians play chess? There is no physical violence in this game as seen in many competitive sports like football, rugby etc. The dangers in playing chess are more subtle, disguised, and this is why many Christians can’t see any problem in playing chess.

Chess is believed to have originated in Eastern India during the Gupta empire, where its early form in the 6th century was known as chaturaṅga (Sanskrit: four divisions [of the military] – infantry, cavalry, elephants, and chariotry, represented by the pieces that would evolve into the modern pawn, knight, bishop, and rook, respectively). The earliest evidence of chess is found in the neighboring Sassanid Persia around 600, where the game came to be known by the name chatrang. Chatrang is evoked in three epic romances written in Pahlavi (Middle Persian). Chatrang was taken up by the Muslim world after the Islamic conquest of Persia (633–44), where it was then named shatranj, with the pieces largely retaining their Persian names. In Spanish “shatranj” was rendered as ajedrez (“al-shatranj”), in Portuguese as xadrez, and in Greek as ζατρίκιον (zatrikion, which comes directly from the Persian chatrang), but in the rest of Europe it was replaced by versions of the Persian shāh (“king”), which was familiar as an exclamation and became the English words “check” and “chess”. Murray theorized that Muslim traders came to European seaports with ornamental chess kings as curios before they brought the game of chess. (source: Wikipedia page) 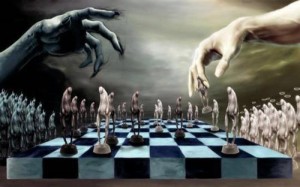 Does the Bible speak about playing chess?

Because there is no evidence that chess existed earlier than the 6th century, we can’t assume that the game existed in the time of Jesus. This is why the biblical evidences will point towards principles about Christian recreation which can help us decide if this game (or others) is something which should occupy any portion of our time. In the times when New Testament was written, the Greek culture was dominant. Even in Israel there were many people conquered by its power. Still there is no biblical evidence that Jesus, His disciples and other Christians engaged in what we call sports, as a way/mean of recreation. They were too busy with better things, things of eternal importance and with eternal consequences.

Rom 12:2 “And be not conformed to this world: but be ye transformed by the renewing of your mind, that ye may prove what is that good, and acceptable, and perfect, will of God.”

John 15:12,13 “This is my commandment, that you love one another as I have loved you. Greater love has no one than this, that someone lay down his life for his friends.”

Rom 1:29-32 “Being filled with all unrighteousness, fornication, wickedness, covetousness, maliciousness; full of envy, murder, debate, deceit, malignity; whisperers, backbiters, haters of God, despiteful, proud, boasters, inventors of evil things, disobedient to parents, without understanding, covenant breakers, without natural affection, implacable, unmerciful: who knowing the judgment of God, that they which commit such things are worthy of death, not only do the same, but have pleasure in them that do them.”

Rom 6:4 “Therefore we are buried with him by baptism into death: that like as Christ was raised up from the dead by the glory of the Father, even so we also should walk in newness of life.”

Eph 4:22-24 “That ye put off concerning the former conversation the old man, which is corrupt according to the deceitful lusts; and be renewed in the spirit of your mind; and that ye put on the new man, which after God is created in righteousness and true holiness.”

Col 3:7-10 “In the which ye also walked some time, when ye lived in them. But now ye also put off all these; anger, wrath, malice, blasphemy, filthy communication out of your mouth. Lie not one to another, seeing that ye have put off the old man with his deeds; and have put on the new man, which is renewed in knowledge after the image of him that created him:”

Eph 4:31 “Let all bitterness, and wrath, and anger, and clamour, and evil speaking, be put away from you, with all malice: and be ye kind one to another, tenderhearted, forgiving one another, even as God for Christ’s sake hath forgiven you.”

Eph 5:11 “Take no part in the unfruitful works of darkness, but instead expose them.”

Eph 2:10 “For we are his workmanship, created in Christ Jesus unto good works, which God hath before ordained that we should walk in them.”

Php 2:3 “Do nothing from selfish ambition or conceit, but in humility count others more significant than yourselves.”

Eph 5:16 “Redeeming the time, because the days are evil.”

“There are amusements, such as dancing, card playing, chess, checkers, etc., which we cannot approve because Heaven condemns them. These amusements open the door for great evil. They are not beneficial in their tendency, but have an exciting influence, producing in some minds a passion for those plays which lead to gambling and dissipation. All such plays should be condemned by Christians, and something perfectly harmless should be substituted in their place.” EW, AH 498

“It began in the Sanitarium before Dr. Kellogg came into the institution. Persons who came there to board and room brought in chess playing and many other amusements. This was not right, and the Lord rebuked the management. Our Sanitariums are not to cater to the perverted tastes of worldly people. The same evils have existed in the Sanitarium on the hillside. A few years ago the managers made it more of a hotel than an institution for healing the sick.” EW, KC 143

“In the night season I was a witness to the performance that was carried on on the school grounds… The students who engaged in the grotesque mimicry that was seen, acted out the mind of the enemy, some in a very unbecoming manner. A view of things was presented before me in which the students were playing games of tennis and cricket. Then I was given instruction regarding the character of these amusements. They were presented to me as a species of idolatry, like the idols of the nations.
There were more than visible spectators on the ground. Satan and his angels were there, making impressions on human minds. Angels of God, who minister to those who shall be heirs of salvation, were also present, not to approve, but to disapprove. They were ashamed that such an exhibition should be given by the professed children of God. The forces of the enemy gained a decided victory, and God was dishonored. He who gave His life to refine, ennoble, and sanctify human beings was grieved at the performance.” EW, CT 350

Some more information about the topic of Recreation you can read on the page dedicated to Christian Recreation vs Worldly Amusements.